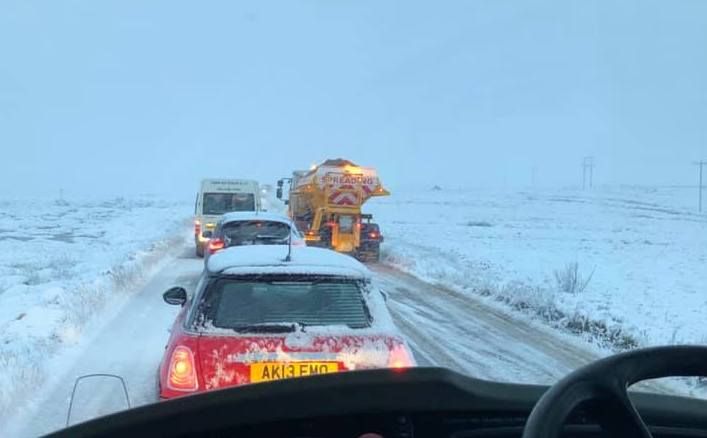 A sudden snowfall – the first of the winter in many areas - brought about rush-hour traffic chaos for Lewis travellers today.

The main road from Stornoway to Tarbert was blocked by a a traffic accident which required attendance by the emergency services.

The incident was reported to have occurred near to the Halfway Garage site on the road between Cameron Terrace and Marybank.

The snow began falling after 8am and built up quickly with heavy falls reported from South Lochs, for example.

By 9.30am, queues on the main road, which had been estimated at a mile in length, had begun to clear.

Police said at 9.33am that the A859 road at Cameron Terrace has reopened to one lane after this morning’s accident, with traffic passing the scene cautiously in slippery conditions.

In a statement issued at 9.40am, Comhairle nan Eilean Siar said:

"An unforecast snowfall has led to traffic congestion on Lewis roads this morning. Temperatures dropped suddenly and the forecast heavy rain turned to snow.

"Gritters have been deployed but in some areas are finding it difficult to get through traffic.

"Drivers are asked to be patient as efforts are made to get traffic moving.

"Conditions are forecast to improve through the day."

In a forecast issued at 9.47am, the UK Meteorological Office said it expected that from 12:00 today (Wednesday 16 January) and 12:00 Thursday 17 January, "Snow showers, with strong winds and icy conditions will make travelling difficult, especially over the hills and in northern coastal areas.

"The heaviest and most frequent snow will tend to be over hills and mountains as well as in northern coastal areas.

"Several centimetres of snow are expected over the Highlands and Grampians whilst at low levels snow cover will be smaller and patchier in nature with some places, especially coastal areas, seeing little lying snow.

"Conditions will also be windy and icy stretches are still expected where snow does not settle.