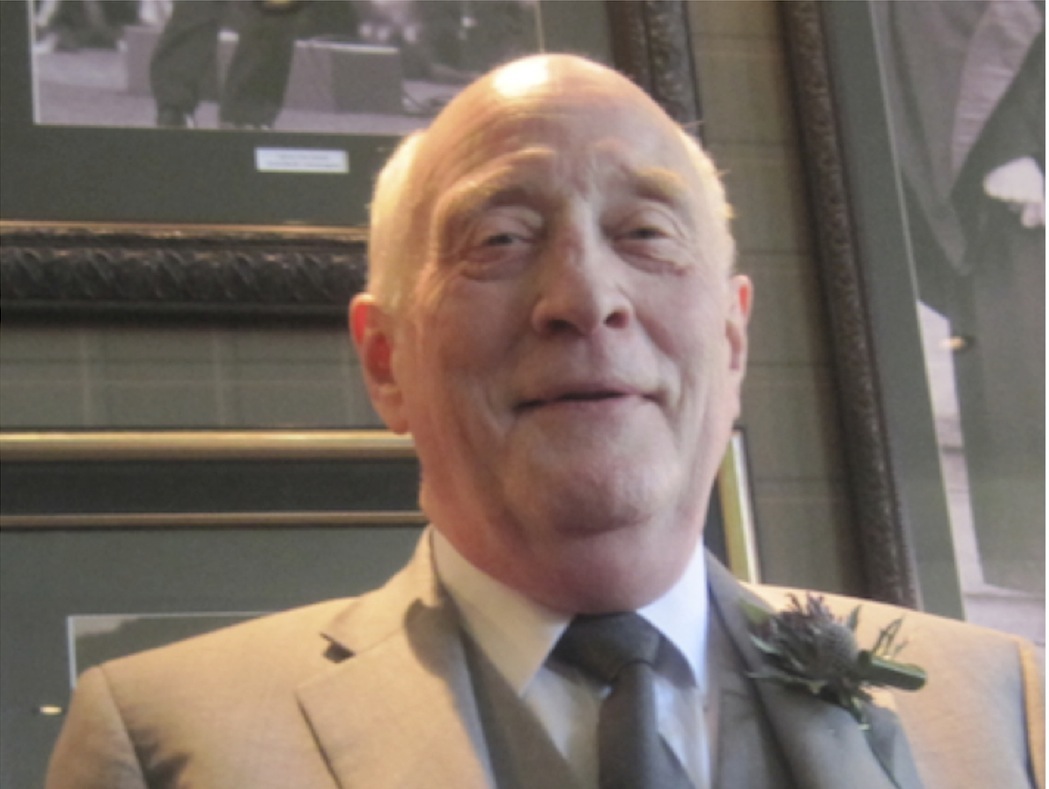 The community of Stornoway bade farewell to Donald M Campbell - one of its best-loved characters – on October 17th this year.  (Contributed by MJM)

Donnie ‘Bookie’ spent his early years enjoying the freedom which the town, the harbour and the Castle Grounds gave him whilst running in-and-out of his dad John Campbell’s newsagents shop on Bayhead.

John had a gallery of black-and-white photographs of contemporary sports personalities on the wall and I remember one of John ‘Don’ Cockell, the English Heavyweight boxer who fought World Champion Rocky Marciano in 1955.

After his education at The Nicolson Institute, Donnie joined the Royal Marines serving in Aden and The Falklands during ten years of service and for several years later meeting up socially and completing parachute jumps with former comrades. At this time he also kept fit with runs round the Castle Grounds.

On his return home he helped develop and run the newsagents for a time until eventually, following his passion for sport (probably acquired from his Dad’s gallery and the free access to newspapers, comics and magazines) and on John’s retiral, he set up his own bookmakers business in town.

This was after an apprenticeship in Hamilton and a battle with the ‘anti-betting’ lobby in the town. A battle, needless to say, this ex-Royal Marine finally won. He went on to develop a successful business and generously shared the fruits of his success amongst charities, local clubs, organisations and friends. Donnie’s generosity is almost legendary! He remembered friends’ birthdays, and their children’s birthdays sending cards and presents. He once sent an actual shop till by courier to his niece Fiona and nephew Paul in Fife knowing they liked to ‘play Shops’.

Donnie epitomised the free-thinking, independent spirit – a maverick in many ways but a kind and friendly maverick. A tad old fashioned and Non-PC, he preferred to see the good qualities in people and usually found their ‘faults‘ amusing, recognising that we all have faults. He practised tolerance – an ability sadly often lacking in today’s media-mad world.

His great pal Kenny ‘Fags ‘ Macdonald, the guitar maestro, laughingly despaired of Donnie’s singular taste in music – namely ‘ Elvis’. Fair enough! He missed Kenny terribly when he passed away. One of his proudest moments came when he was asked by Kenny’s daughter Karen to give her away at her wedding in 2012.

When I moved to Inverness I regularly received phone calls from both Kenny and Donnie often opening with “Wait ‘til you hear this one“ followed by a hilarious report on some blunder or faux pas one or the other had just recently committed. But it was all fun and wind-up. And fun was an important element in Donnie’s life.

But he also possessed a keen intellect and a range of references which he used to complete the daily crosswords in some of the quality papers (often his text messages resembled cryptic crossword clues).

I always made sure I was in Donnie’s team for Trivial Pursuits and once phoned him from Glasgow to ask for an elusive tennis player’s name which, of course, he provided immediately.

If things went wrong in his life, which they occasionally did and sometimes self-inflicted, it must be said, he would mutter “Tud! Win some. Lose some.” and move on. He rarely held grudges.

In recent years Donnie’s health began to deteriorate and over time he lost the ability to taste and latterly the ability to swallow and to speak. He endured all of this with courage and good spirit continuing determinedly to attend to the shop and get about town still able to smile and communicate as best he could. He kept contact by text until eventually that, too, was beyond him. This was all particularly sad since Donnie so enjoyed dining out with friends including his staff who were also his friends, some of whom had worked with him since the Bayhead days.

He simply loved downtown Stornoway, whose characters and influences shaped so many of us and he was acutely aware of the changes being brought about on his town by technology and large scale commerce. “The town’s quiet,” he’d text and, compared to the lively place he grew up in, it is.

For his many friends and family there are so many memories. Late night visits, late night texts, mainland visits including Murrayfield, New Year visits with the famous cricket bag and its cargo of assorted drinks, Sami or “Shammi” the cat, discussions and anecdotes at home and in the pubs, etc, etc..

Paul, in his warm eulogy at the funeral service, put it succinctly when he suggested that the words of the song ‘My Way’ made famous by Frank Sinatra would aptly describe Donnie’s life. And they do.

Downtown SY remembers your presence…and we all smile in recall.