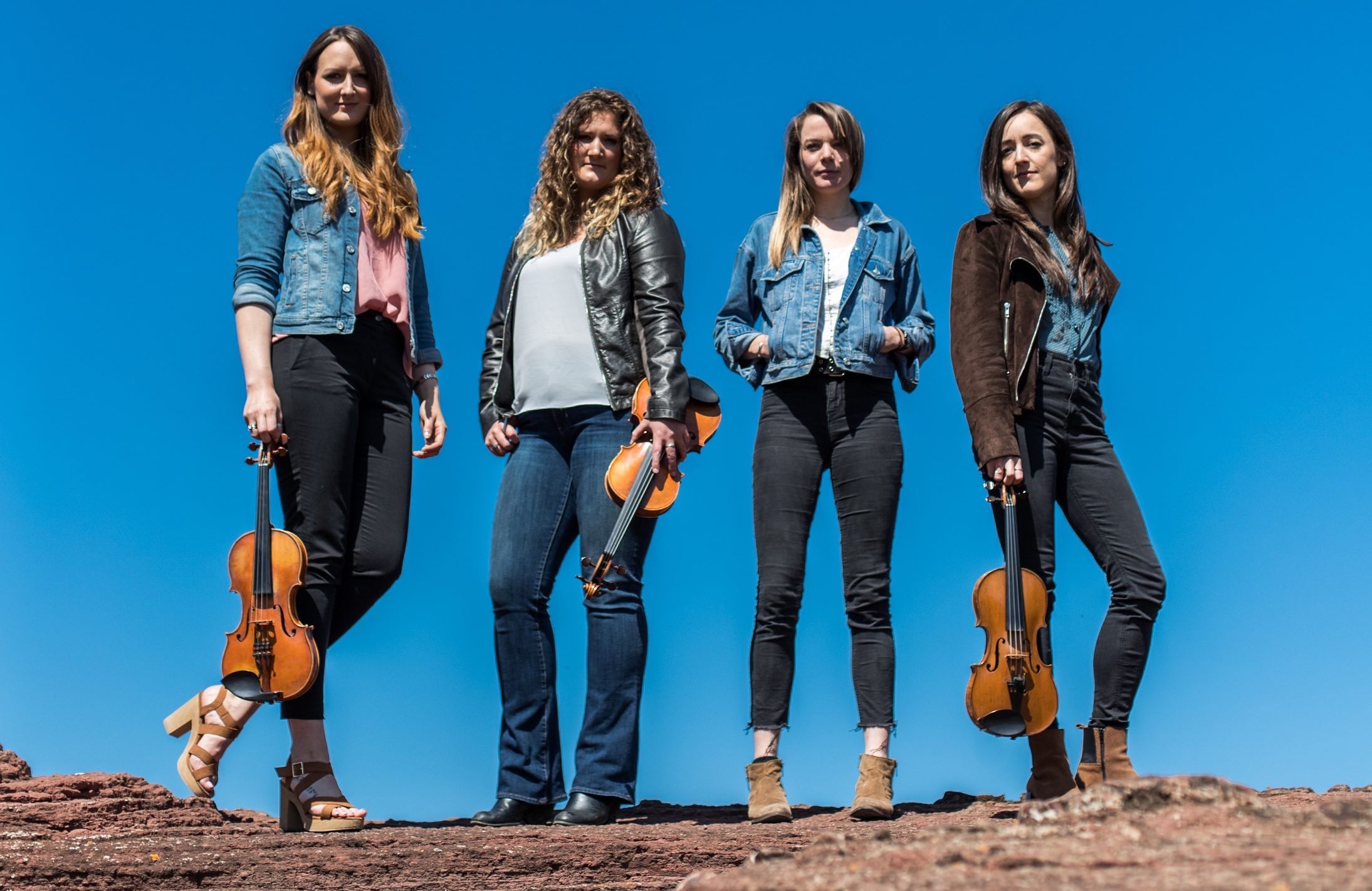 Award-winning quartet Fara (seen above in a photograph by Mike Guest) have added their support to HebCelt’s industry-leading efforts to improve gender equality among artists at music festivals.

A recent survey showed that women made up just 26 per cent of festival line-ups in the UK in 2017 and a campaign was launched to achieve a 50:50 balance by 2022.

The Hebridean Celtic Festival has had a minimum 50:50 balance for at least five years, putting it ahead of most of the summer music events.

It is music to the ears of Fara, who will perform at HebCelt as part of a UK tour promoting their second album ‘Times From Times Fall’. They join festival headliner KT Tunstall, who is playing with an all-female band, in praising HebCelt’s promotion of female artists.

“Things have been noticeably changing since the conversation around gender equality hit the mainstream in recent years”, says Catriona Price, who plays with fellow fiddlers Jeana Leslie and Kristan Harvey, along with pianist Jennifer Austin.

“We have definitely noticed a decrease in sound engineers showing us how to use our own equipment and audience members commenting on our smiles rather than our music.

"However, it will be a while before things are equal across the board.

“It’s wonderful to see festivals such as HebCelt making a conscious effort to present a 50:50 line-up. Festivals being mindful of equality whilst programming is vital to shifting audience attitudes and perceptions - so we salute you, HebCelt.”

Fara were formed in 2014, bringing together four exceptional young musicians from Orkney who are now at the forefront of today’s Scottish folk scene.

They made several appearances as The Chairettes, a backing band for Orkney band The Chair. But, at one gig, they were asked to play a couple of sets on their own and Bob Gibbon, The Chair’s accordionist and Orkney Folk Festival director, suggested they form a new band.

Following a nomination for Up And Coming Act of the Year at the Scots Trad Music Awards in 2015, the success of their debut album ‘Cross The Line’ in 2016, lead to a nomination for the BBC Radio 2 Folk Awards’ Horizon Award.

In 2017 they won the Preis der Deutschen Schallplattenkritik (German Critics Choice Award) and were nominated for Folk Band of the Year at the Scots Trad Music Awards.

It will be the band’s second visit in three years to HebCelt, having made their debut in 2016.

“We have fond memories of playing HelbCelt. We had some great gigs last time we were up. A packed marquee and a beautiful trip to Harris which was a treat”, they say.

“Festivals are massively important for us. They provide an opportunity to get out to larger numbers of music lovers who may never have heard us before.

“It’s also a big treat to get to bump into so many pals during the festival season. Sometimes you’ll end up bumping into a pal from Australia at a festival in France for example, and it makes the world feel like it’s your neighbourhood.”

More parts of the world are becoming familiar to the band, who are looking forward to their first trip to Australia next year, as well as visits to China, Canada and Switzerland, having made debut performances last year in the US, Canada, Sweden and Germany, the latter winning on the hospitality stakes, according to the band.

“Some of our favourite audiences have been in Germany. The general public there just really seem to value the arts, and will take a punt on going to hear something they aren’t familiar with at all.”

HebCelt 2019 will run from 17-20 July and will feature almost 30 international acts in the main arena programme – including headliners KT Tunstall, The Shires and Tide Lines - as well as events in various venues in Lewis and Harris.