Our correspondents in Spain and Greece talk of ever tightening coronavirus lockdowns.

Why is welovestornoway.com telling you about this…because these are communities just like ours - not big cities - and this is what other countries are doing.

The situation is relentless, the rising number of deaths here in Spain means that Spain has now got more deaths than any other country other than China or Italy.  Spain’s deaths have gone from 1350 yesterday to 1813 today. An increase of 34%.

The State of National Emergency has been extended for a further two weeks and I would not be surprised if it lasted for two months or even more.

We are not allowed out of our homes except for essentials; food, pharmacy, fuel, allowing dogs to defecate, but only 50m from your own house.

We have to carry identification, and from today (Monday March 23) to fill in a form which has your tax number, where you are coming from and where you are going to.

I had to do a shop on Saturday and I placed an order via WhatsApp at the local supermarket and arranged to collect it at a designated time. I drove to the village and took cash from the bank, carefully keeping the receipt which I would have to show to the police if I was stopped. I queued two metres apart to get into the fruit and veg shop where they were allowing people to enter two at a time. Everyone was sombre but respectful. I then went and collected the shopping which was nicely boxed up and promptly drove home. The whole exercise took about an hour. That’s it. I won't be going out again for two weeks if I can help it.

The view from Amanda's home

The village is like a ghost town, although there were people around in total I must have seen less than 20 in what would normally be a bustling village on market day with cafes full and shouts of friends and music from the cafes blaring. This is an international village with 60% locals and 40% incomers from many different countries. We had all embraced the Spanish culture, two kisses, hugs and plenty of cafe life. This has all come to an abrupt end.  We are not allowed to travel in the car with any more than one person, gloves must be worn at all times, and masks if you have them.

My husband Kenny is in the high risk category and he thinks he may have to take self-isolation seriously for a year. I feel for families in the towns, in small houses or apartments. I heard one man presented himself at the police station and begged to be arrested, pleading insanity because of living through the lockdown with his mother,

Anxiety is an issue, and I have personally felt it on a few occasions, even breaking down and crying once. I feel fearful for my husband and the future. I am not a person prone to this sort of thing so this tells me that there must be many people suffering badly. I am fortunate to being a trained nurse, I was a cardio-thoracic theatre scrub nurse as well as working on wards, so I know exactly what to do regarding infection control. Detergent, as in fairy liquid or equivalent in hot water is all you need to clean your home, it kills all germs and viruses. I use it to scrub the kitchen and bathroom and floors. Once a month I might put a splash of bleach into it, but otherwise this is all you need. I prefer not to have lots of different chemicals in my home as well, as it is bad for breathing issues.

So the world is in pandemic, yet here spring has sprung. The flowers in Spain are incredible in spring, the colours like the machair in ungrazed areas of the Hebrides. The skies are always impressive in this area of Andalucía which means “under the lights” and the stars are clearer than ever with the levels of pollution dropping. 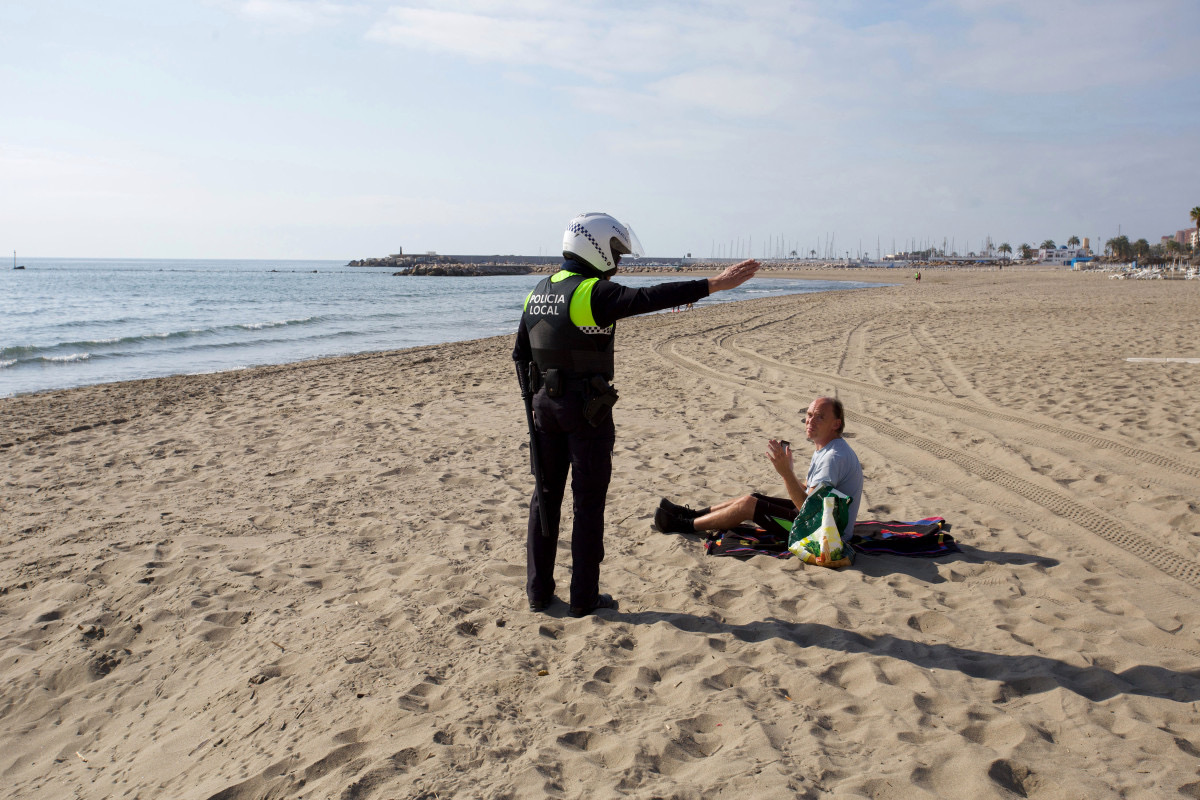 A tourist being ordered off a Spanish beach

Lockdown sounds frightening, but in reality it is like a social security blanket. This threat is being taken seriously and it brings tears to my eyes the care for community which is shown by this. In towns and villages the residents appear on their balconies each night 8pm and clap and whistle to thank the emergency services, police, army and medics.

The comparison with the chaotic UK couldn’t be greater, with people ignoring social distancing, panic buying and leaving nothing for those less fortunate. The British Prime Minister needs to take decisive action and be firm, lay down the rules and police them. Here the police are out with the army, enforcing the rules but also each night disinfecting the streets. The Spanish police, army and people are uniting for the greater good.

The Spanish prime minister Pedro Sanchez issued a statement “The worst is yet to come” Of the deaths, about 60% have occurred in Madrid, but the new thing is that younger people are being affected and are dying. Pedro Sanchez ordered all private hospitals to be requisitioned for the health service and all hotels will be closing by the end of the week with many being turned into hospitals. A massive shelter has been opened for the homeless.

This virus lives for days on surfaces, I’m not being paranoid when I wash with a damp cloth all shopping and I dispose of any bags carefully, using disposable gloves which I then remove before washing my hands. I never thought I would be the person to do this obsessive behaviour, but the health of my husband is paramount.

From Spain, I wish all the people in Scotland and especially the Hebrides the best for the coming crisis. Stay safe, stay at home and take this threat seriously. 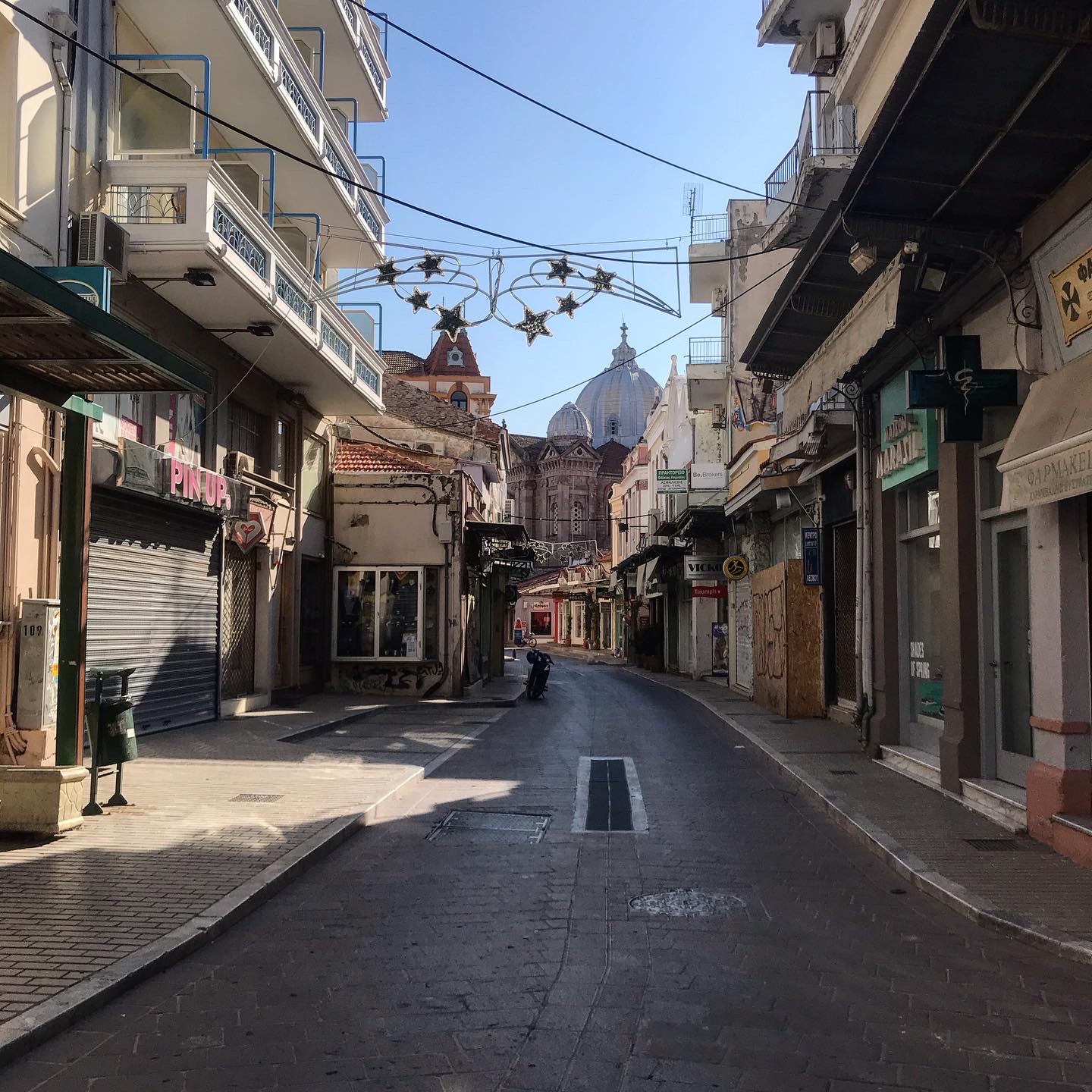 The empty streets of Mytilene in lockdown

Melissa Silver reports from Lesvos…As of 6am this morning (Monday 23 March), Greece has gone into lockdown. Emergency messages were received announcing the news last night, stating: “Starting tomorrow Monday at 6:00am nation-wide strict restrictions on public movement apply. Only movements that serve specific needs or for work are allowed and a permit is required. Stay home, stay safe.”

From now on, to go to the supermarket or out for a walk, anyone currently residing in Greece has to carry a document stating the intentions of their movements. The document states the person’s name, address and reason for being outside.

A passport or ID card must also be carried at all times. Anyone seen to be flouting the rules will face a €150 fine.

In terms of humanitarian work, the few NGOs that were still functioning on Lesvos are now scrambling to get the necessary paperwork to continue.

Gordon Jamieson, NHS Western isles chief executive said last night:  “A brief update tonight: in the circumstances, I have to say that I very much welcomed the decision to restrict travel here to the Outer Hebrides and the other islands.

"One thing we must certainly do, and this will contribute to that, is to protect and preserve the health services we’ve got to respond and treat the population.

"It’s also important that I point out to you that although we’ve had a very busy day in terms of our ongoing preparation, it still remains that there are no confirmed cases of coronavirus in the Outer Hebrides.”