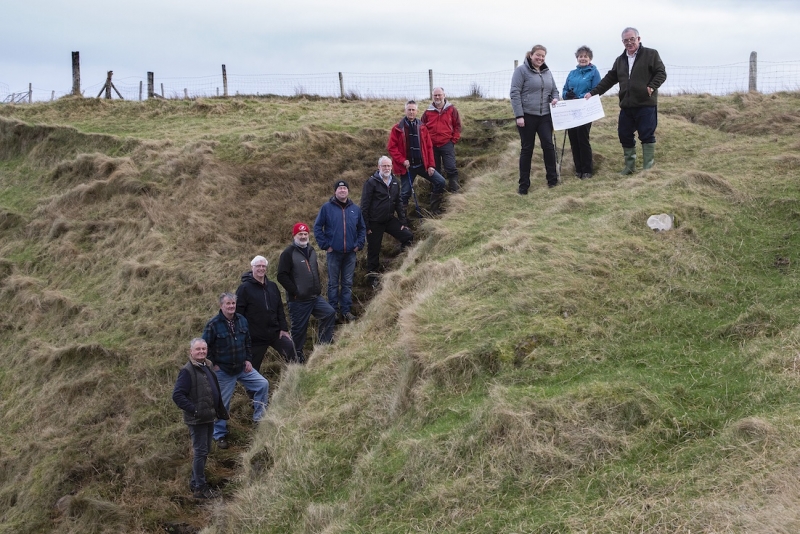 New steps for footpath round Point

The community wind farm charity, which runs the Beinn Ghrideag wind farm, is to donate £9,000 towards work on the historic Shulishader steps – the 88 steps which lead steeply down to the geodha (Gaelic for cove), an old landing site for fishing boats which is enjoying renewed popularity as a wild swimming spot.

To improve safety, the steps will be cleaned up and restored and a hand rail will be installed. An access path of around 300 metres is also to be created.

The work at Shulishader is part of a £1 million project to create a clear walking route from Stornoway along the Braighe and all the way round the peninsula of Point.

Once complete, it will be 40km long and form part of the legacy of Point and Sandwick Trust’s community wind farm, as one of the key funders.

The first phase of the path, carried out in late 2018, involved shoring up the sea wall outside Eaglais na h-Aoidhe and building a better path along the coastline towards Aignish. That phase cost £114,00, with £57,000 from LEADER and the remainder from the Beinn Ghrideag profits.

Norman Mackenzie, chair of Point and Sandwick Trust, said: “At PST we recognise the long-lasting value that the coastal path can bring to our area, both socially and economically.

“By providing easier access to our coastline, for the benefit of locals and tourists alike, the coastal path committee are making a real contribution to improving quality of life and opportunity in our area. By restoring the steps and opening access to the geodha at Shulishader, this second phase builds on the coastal protection work carried out at the Eaglais na h-Aoidhe site and ensures that a second historic site in our area can be preserved for the benefit of future generations.”

Point and Sandwick Trust’s community consultants, Alasdair Nicholson and Tony Robson, have been working with the Point and Sandwick Coastal Community Path committee on the phased project and are pleased to be embarking on phase two, which will also include marking out the walking route from the Braighe to Swordale – a distance of around 2km – with marker posts and putting in a number of gates for access.

Alasdair Nicholson said: “I am pleased that we are able to have put the funding together for this next step with support from PST, the Landfill Trust and a contribution from the grazings committee. These developments help responsible public access but also create new opportunities for crofting townships to diversify economic development.”

Tony Robson added: “It’s great to see this gem of a place being made more accessible.”

Work on the Shulishader steps and access track is likely to begin at the end of February and take around a month, with the handrail being made separately.

In addition to Point and Sandwick Trust, a number of other groups and organisations have helped fund phase two of the coastal path. They include the Scottish Landfill Fund, which committed £7,000 and is administered locally by Third Sector Hebrides, and the Shulishader and Newlands Grazings Committee, which donated £4,000.

Erica Geddes, administration manager for Third Sector Hebrides, said: “Third Sector Hebrides are approved by SEPA to administer their Scottish Landfill Community Fund which distributes money from landfill taxes to support Scottish projects. This has enabled us to fund local community groups such as Point and Sandwick Coastal Community Path SCIO group with eligible projects such as Shulishader steps and community access pathway.

“We have supported Point and Sandwick Trust on a number of local projects and I am sure we will work on more over the next few years. These local projects allow public amenities to be restored, ensuring they are safe and also accessible to the general public. We have no doubt that this project will be beneficial to the local community and given its beautiful surroundings will also be enjoyed by visitors to the area.”

Matt Bruce, chair of the Point and Sandwick Coastal Community Path committee, said: “I am delighted the plans to carry out more works to the community path can be put into place so quickly. The reaction from all parties involved has been so supportive and we are now able to carry out the maintenance and improvement works needed to allow better access.

“This is one of the many interesting local features which are easy to forget about – we should all be welcoming the fact that better facilities are coming to our neighbourhood.”

Iain MacSween, clerk to the grazings committee, said they were delighted the work would begin soon. “We’ve been talking about it for quite some time and it’s great to see it finally getting underway. The steps themselves are a historical landmark in Shulishader.”

He recalled the “great summer pastime” of launching smaller toy boats from the bay, as a child, but said it had been at least 40 years since any proper work was done on the steps.

He added: “We are extremely grateful to the Point and Sandwick Coastal Community Path committee for pushing this and we are proud to be associated with them in reinstating the steps and improving it as an amenity – not just for Shulishader but for the wider community.”

Donald Taylor, a resident of Shulishader, also welcomed the project, having campaigned for it for years. He also hopes to see a bench erected at the top of the steps in the future, in memory of a Aird primary teacher Chrissie Murray, whose croft ended there, and a picnic area down at the cove itself.

Donald, who spent a lot of time out in his uncle’s boat as a youngster, said: “I’m pleased to see this work… and I’ll be more pleased when I see it finished.”

To mark the occasion, a photocall was held at the steps recently, involving the various organisations and people involved in organising the second phase of the coastal path.

Wild swimmer Colin S Macleod, who runs the Hebridean Sea Swimmers Facebook page, came along with some friends to take a dip in the bay to celebrate the news.

Colin said: “I’m really pleased to hear that the 88 steps are going to be cleaned up and a safety handrail put into place in this historical sheltered bay.

“I’ve been wild swimming there a few times. It’s such a beautiful place with a fantastic coast to be viewed from sea level. We’ll definitely be back there again.”

The photocall was also attended by Donald MacSween, secretary of Falmadair, the North Lewis Heritage Sailing Trust, which endorsed the coastal path committee’s funding bid and hopes to hold future events in the bay, especially during the Year of Coasts and Waters 2020. As a community boat trust, Falmadair has sgothean in its curation similar to those that would have been in use when Shulishader was a working bay.