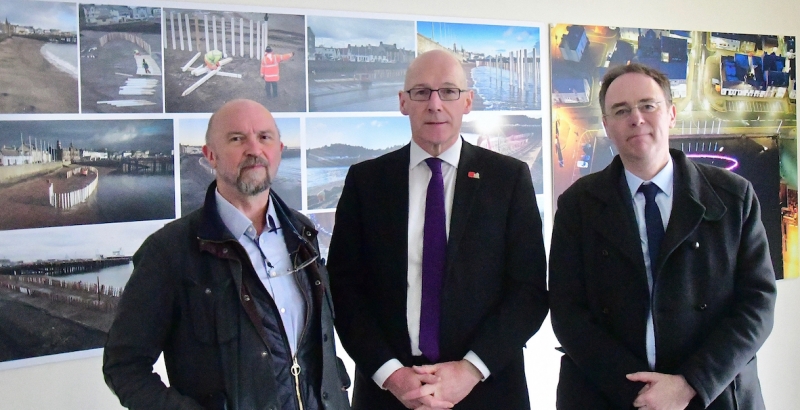 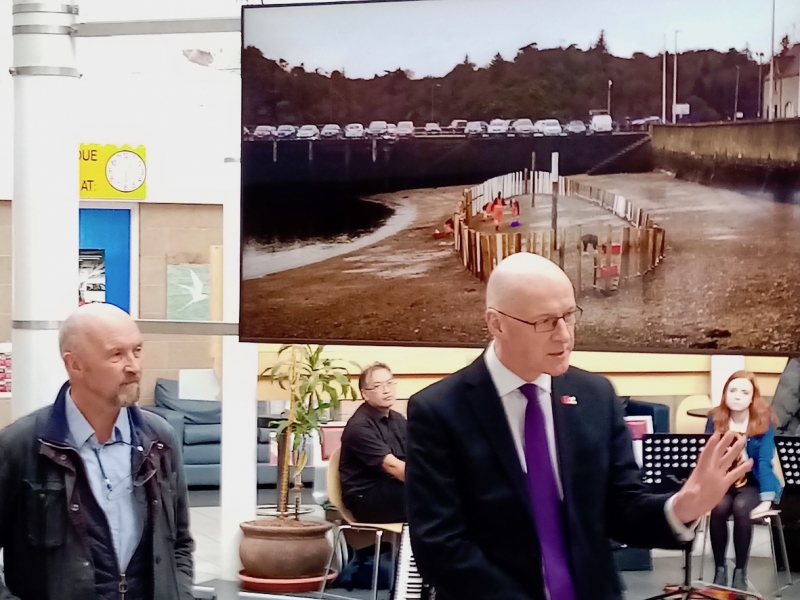 The widely praised and much-visited ‘Sheòl an Iolaire/The Iolaire Sailed’, was commissioned by Stornoway Port Authority and installed on the town’s South Beach ahead of the 2019 centenary of the tragedy.

The sculpture, designed by Torcuil Crichton and Malcolm Maclean, was envisaged as a temporary installation, but in response to enormous public demand, the Port Authority has applied for planning permission to leave the installation in place as a permanent reminder of one of the worst maritime tragedies in United Kingdom waters.

The exhibition in the ferry terminal comprises photographs, time lapse film, aerial films, poetry and paintings  of Sheol An Iolaire from its conception to its installation. Malcolm Maclean thanked all of those whose work was on show in the exhibition and the many hundreds of others who were too numerous for inclusion. He went on to commend the ferry terminal as potentially a great new venue for Stornoway and hoped this would be the first of many exhibitions, music performances  and and other events that could be held there in the years to come.

The HMY Iolaire struck rocks outside Stornoway harbour on 1 January 1919 when it was taking WWI veterans back to the Isles of Lewis and Harris – 201 of the 280 men on board perished.

The 189-foot-long installation reproduces the dimensions of the ship and located in the harbour where it was due to berth. It features 280 wooden posts – one for each of the men on board the fateful voyage – with 79 painted white to represent the survivors.

Each post is lit with a waterproof footlight and at night, and when covered by the tide, the outline of the ship can still be seen beneath the waves.

It formed a highly visible part of the Iolaire centenary commemorations last year and has become a hugely popular site for both residents and visitors, while online images have attracted thousands more to the Iolaire legacy. There has also been a tremendous artistic response, some of which has been curated into an exhibition in the Stornoway ferry terminal.

Sheòl an Iolaire has been recognised by the Stornoway Amenity Trust’s Community Public Service Award for the individual or the group which has done the most to promote the town in 2019. It has been registered as a war memorial by the Imperial War Museum and has been listed for a John Byrne award.

Murdo Murray, chairman of Stornoway Port Authority, said: “We are extremely grateful to Mr Swinney for opening the exhibition telling the story of Sheòl an Iolaire which is a poignant and innovative commemoration of an event that had a huge impact on our community.

“We feel it should now remain as a permanent memorial alongside the new visitor centre as a legacy of the centenary events. Together they will tell the powerful and moving story of this terrible tragedy which should never be forgotten.”

Torcuil Crichton paid tribute to fellow artist Malcolm Maclean from Uig, as well as Stornoway Port Authority and their engineers, Wallace Stone and Stornoway Trust, who quickly grasped the potential of the idea.

“That Sheòl an Iolaire is still standing, is testament to their skill and ability to turn a concept into a real construction”, he said.

He added: “Sheòl an Iolaire tells the whole story of the tragedy in the simplest way possible, we brought the ship home. 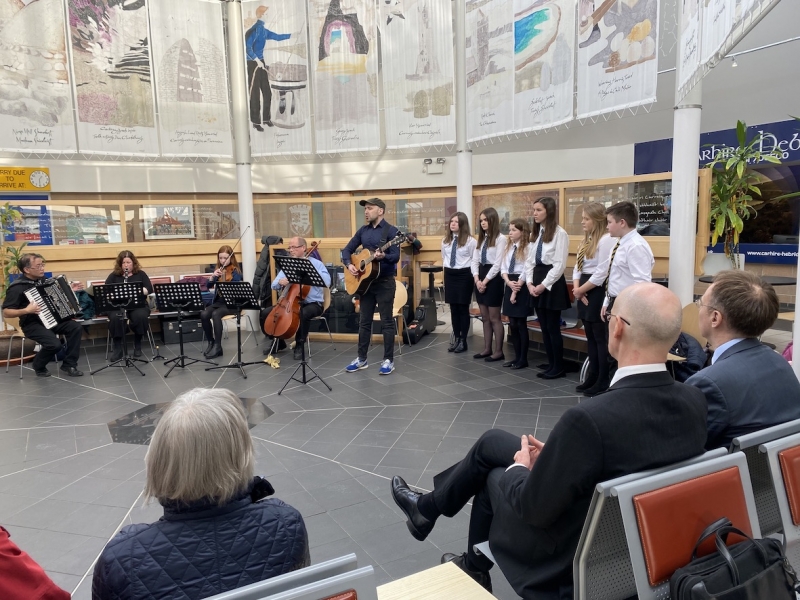 “But on such a sensitive subject people bring their own memories and emotions to the site which changes with every visit. The incredible artistic response, some of which is in the walls of the ferry terminal, is part of that. The public response has been amazing and shows what can happen when people are left to make up their own minds”.

The Port Authority and Mr Graham, as well as the Stornoway Trust; An Lanntair arts centre; Museum nan Eilean; local historical societies and others, are part of a working group that has proposed the visitor centre.

Stewart Graham, founder of the international Gael Force Group which began life in his home town of Stornoway, said: “The Iolaire Centre will mark the maritime disaster at Stornoway’s Number 1 pier.

“Following consultation with the community in 2018, there was strong support for a visitor experience to commemorate the tragedy and its impact on the islands in the following period.  The vision for the centre is to create a space that tells, not only the Iolaire story, but that of the wider context of the island’s maritime history and war involvement.

“The centre will seek to tell the story sensitively and with due respect, over a century after the tragedy. It is expected that the centre would be both a lasting commemorative introspection and a world class visitor experience that supports a major, transformational, economic boost for the Islands.”

Music at the opening was provided by singers from the Dìleab project and Willie Campbell who sang ‘My Time Was Not At Hand’, one of the songs performed when Mr Swinney was among the audience at Celtic Connections recently.  Mr Swinney spoke at the opening event about how moving he had found the original Dileab event in December 2018 which he watched on-line and the entire Iolaire commemoration as it developed.

The event in the Stornoway Ferry Terminal building is also seen as pioneering the use of the terminal as a venue for performances and exhibitions with the audience being impressed by the excellence of the acoustics.

Middle photograph: The art form, the artist and the minister. Photograph by Chris Murray

Lower middle photograph: Willie Campbell with singers and musicians from the Dileab event