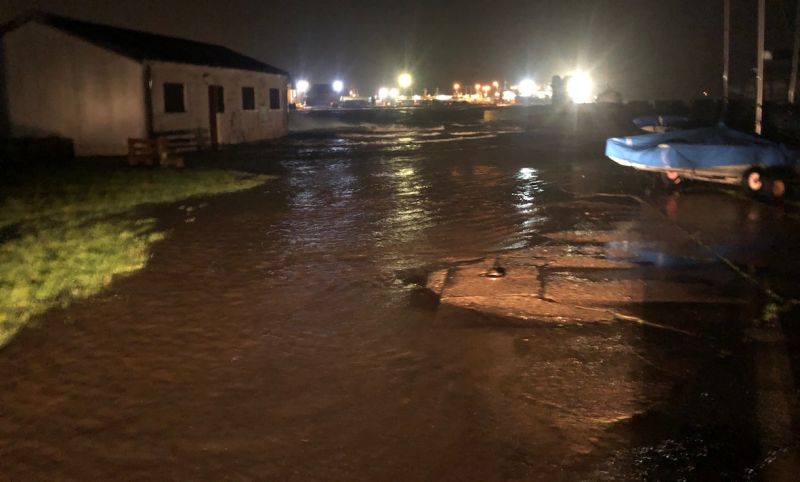 The Bràighe causeway was closed around high tide this morning at 09:08 due to high waves and strong southerly to southwesterly winds. It is now open again. The Eriskay Causeway is closed.

The Braighe causeway was closed yesterday (Monday) until after midnight. HM Coastguard - Western Isles, Skye and Lochaber reported then:"Braighe is now fully open. Drive subject to conditions please. Thanks to the kind people who dropped food off for our teams that have been committed nearly continuously since 0700 Monday – massively appreciated."

Scalpay Bridge and the Uist causeways are also likely to be impacted today.

Further updates will be provided via CnES and Western Isles Police on Twitter.  There is also the Facebook Page of the Western Isles Coastguard.

Ferry services are very badly disrupted today (Tuesday 14th January). All early ferries are cancelled.  All ferries to Harris and Norrth Uist are cancelled for the whole day.  For further details https://www.calmac.co.uk/

SSE is on alert and is acting on contingency plans to deal with any damage the storm may cause to the electricity network. Any customers who lose their electricity supply are urged to contact SSE on 105 to report damage or highlight neighbours or friends who may need extra help. Power cuts have been reported overnight in North Uist and Benbecula and SSE is aiming to restore power by 10am.

A yellow warning for wind was issued late yesterday evening by the Met Office extending for the whole of today.  "The very strong southwesterly winds will continue at times through Tuesday with gusts of 60-70 mph. Although winds are generally less strong than during Monday, some further disruption is likely especially around coasts. Although the frequency and strength of gusts will probably diminish through Tuesday afternoon and evening, some further strengthening is possible again later.”

A Flood Alert has been issued for Western Isles.  “There is a risk of significant coastal flooding on Tuesday due to higher than usual tides and large waves. This will increase the risk of flooding to low lying land and roads and could affect exposed coastal properties. There could also be wave over-topping of coastal defences and causeways. The periods of greatest risk are around the high tide which occurs in Stornoway around 2100 on Monday and 0900 on Tuesday.”

All schools in the Uist and Barra are closed today (Tuesday 14th January)  as bus operators have cancelled all their services. Schools are open for staff and they are expected to attend when they deem it safe to do so.

As of midnight, CnES said it was anticipated that schools in Lewis and Harris will be open today, subject to final checks on bus services and causeways. Decisions will be taken at a local level.

There may be adjustments made to today’s homecare service and all those affected will be contacted directly regarding alternative arrangements.

The Comhairle offices will be open as normal and staff are expected to attend when they deem it safe to do so.

Scottish Fire and Rescue Service (SFRS) is reminding members of the public to take extra care if using candles during any power cuts which occur due to winter storms. In the event of a loss of 999 services, all fire stations will be manned by emergency services.