02.40********The declaration of the result made by returning officer Malcolm Burr is as follows:

There were 65 rejected papers.

Mr MacNeil’s first response is: ”That’s the way we do it in the Western Isles!“

He went on to say: “Can I particularly thank staff at tthe count here for their hard work all night and those who worked at the polling stations. Tonight’s election can be viewed as a disaster or a success. A disaster that we are going to be stuck with Boris Johnson as Prime Minister, but a success if it leads to a move to Independence for Scotland.”

01.56*******Two Labour front-bench spokesmen, who had held seats in Workington and Darlington, have been defeated.

01.35*******SNP gain Rutherglen and Hamilton West.  That's a gain from Labour which has already recorded 4 losses.

00.44*******The plane carrying ballot boxes from Uist and Barra is expected to leave Benbecula in the next 10 minutes, with papers due to arrive here at the count centre around 1.30am. The plane is expected at Stornoway Airport at 01.17am

00.05******Results starting to be declared:  The Conservatives have won Blyth Valley from Labour. Labour had held that seat since 1950.

23.58******We have followers on WLS Facebook to our continuing coverage as far away as Japan; Calgary, Canada; the Isle of Man; California, USA;  Edinburgh, Philadelphia, USA; Bali, Mexico and Sussex…plus someone who is hiding behind their sofa!

23.00******Verification of the Stornoway boxes has been completed (checking that the number of votes in the boxes matches the total voters recorded) and counting has now begun in Stornoway North and South wards.  We hear that a helicopter is bringing the Barra ballot boxes up to Benbecula to join the boxes from North and South Uist. All of them will travel together to Stornoway airport on a single chartered plane.

22.35******Counting tables are beginning to look busy, with ballot boxes from Stornoway North and Stornoway South now being opened and sorted. Candidates, agents and electoral staff are allowed beyond the red and white chain to oversee the process.••••••

The Conservatives have won the 2019 UK General Election and Boris Johnson will enjoy a commanding House of Commons majority, the broadcasters' exit poll suggests.

The poll - conducted by Ipsos MORI on behalf of Sky News, the BBC and ITV News - forecasts the Tories will win 368 seats, with Labour on 191 seats, the SNP on 55 seats and the Liberal Democrats on 13 seats.

To form a majority government in the Commons, a party needs to win more than 325 seats.

Since 2014, voters in the Western Isles have taken part in one Scottish Parliament election, two European elections, two referendums, and three UK General Elections…as well as a local authority poll.

The exit poll suggests Labour are set for a hugely disappointing night, with the party forecast to secure their lowest number of seats for decades.

The exit poll numbers would give Prime Minister Boris Johnson a Commons majority of 86, vindicating his decision to push for a winter election.

The prediction for Scotland sees the SNP taking 55 out of 59 seats.  The exit poll says that Na h-Eileanan An Iar is 99pc likely to be an SNP hold.

SNP candidate Angus Brendan MacNeil is the only candidate standing in this election to have stood at every previous election in this constituency this decade. He’s won the seat four times, every time he has stood, since 2005, when there were just six SNP members of parliament.

At that time he became the second SNP member to represent the Western Isles. Before him Donald Stewart was SNP MP from 1970 to 1987, when he retired and his seat was subsequently won by Labour’s Calum Macdonald. Calum Macdonald stayed in as MP until ousted by Angus Brendan MacNeil in 2005.

The candidates in Na h-Eileanan An Iar are:

Counting has begun in Stornoway in Ionad Spors Lèodhais. The result is expected about 3am.

There are 21,106 registered electors in the Western Isles, including 4,710 who have registered for a postal vote.

Stornoway North and South have the largest numbers of electors, with 2,269 and 2,155 respectively. Loch a Tuath, now being verified, has 1,699 voters.

Local MSP Alasdair Allan is talking of a high turnout across the country although he is doubtful that the exit poll is accurate in predicting such a high rate of success in the Scottish seats. 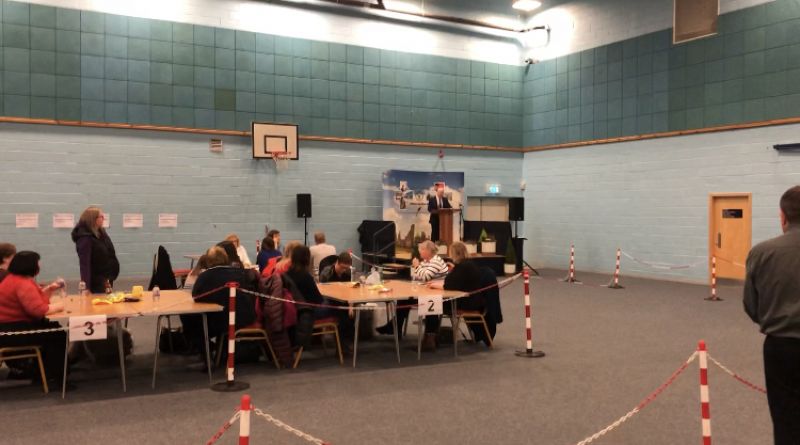 The local count was introduced at 10am by returning officer Malcolm Burr.

Earlier there was in a state of high anticipation as they awaited the first ballot boxes to arrive after polling stations closed at 10pm.

The photo shows some of the counting team beside the door through which the boxes will shortly begin to arrive.

How does the count process work?

“The first stage of the Count is the verification which seeks to ensure and demonstrate that all ballot papers issued at polling stations and returned postal ballot papers have been brought to the Count.

In the presence of the Counting Agents each ballot box will be emptied onto the counting tables where groups of four Enumerators will count the ballot papers, face up, in bundles of 50 secured by a rubber band or clip. The number of ballot papers in each box should match the number on the relevant ballot paper account.

When the verification of several ballot boxes is complete, the votes will then be mixed in bundles and the count stage will begin.

Sorting between candidates and counting votes:

A Chief Enumerator will place 500 mixed ballot papers onto the table. The enumerators will remove the clips and sort into labelled trays. There are two trays for each candidate and one tray for doubtful votes. The votes will not be counted at this stage – merely sorted – between candidates.

Once this stage has been completed the bundles in each tray will be counted into 50s and each bundle secured by a clip. Any bundle less than 50 will be banded by a slip of paper and marked with the number of votes on the bundle.

Once the ballot papers have been counted, the Chief Enumerators will complete a Count Control Sheet and confirm with the Count Assistant that the totals add up to 500. “

As you can see, the process is carefully controlled to ensure there are no mistakes and that totals match up at every stage.

Almost exactly 101 years ago, on December 14th 1918, Western Islanders went to the polls to elect their first MP ever. He was Dr Donald Murray, a popular general practitioner who served as Lewis Medical Officer of Health and Medical Officer for Stornoway.

The result of the 1918 election was not announced until December 28th as so many men were still serving overseas following the armistice after the First World War.

It was the first election held after the enactment of the representation of the people act 1918, so that women aged over 30 and all men aged over 21 could vote.

Dr Murray stood under the slogan of ‘An Islesman for the Isles’. He campaigned on the issues of crofting and unemployment and criticised the development plans of Lord Leverhulme. His chief rival was Sir William Dingwall Mitchell Cotts, a Glasgow shipowner who was standing as a coalition Liberal candidate with Leverhulme’s personal support. In the end, Dr Murray won by 3765 votes to 3375, a majority of 390.

Dr Murray became an MP just three days before the Iolaire disaster. During the aftermath of the disaster he assisted at the temporary mortuary at the Drill Hall at Battery Point on 1st January and personally accompanied the policeman who brought harsh news to many of the homes affected.

He later established a fine reputation in the House of Commons, raising the issue of the Iolaire and keeping it in political consciousness, especially where it related to returned servicemen and the conditions of their lives. In his maiden speech on 10th March 1919 he pleaded for the right of returned servicemen to have crofts from which they could make a living.

After his maiden speech, a fellow MP said: “Those who have listened to my hon. Friend from the Western Isles will realise that he is speaking for a body of Scottish people who receive very little attention in this House because of their geographical remoteness from London in which the House of Commons is situated.”