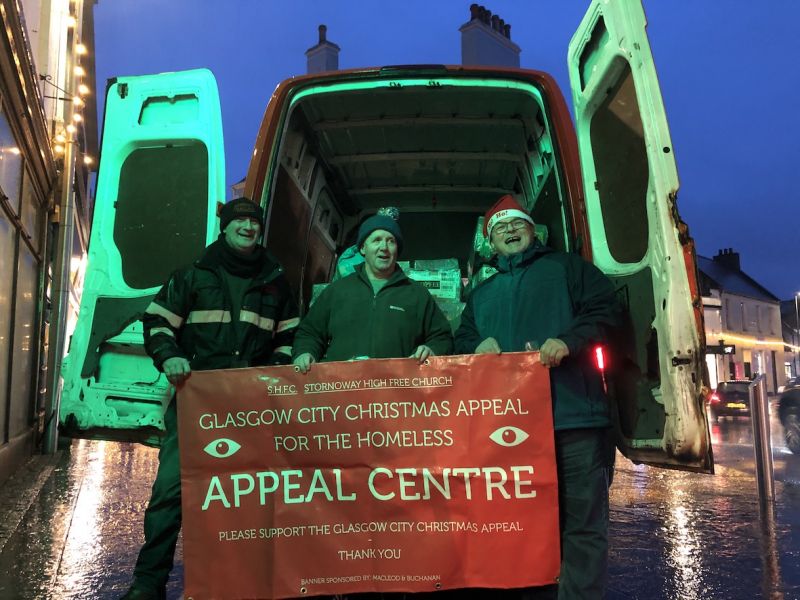 A new shipment is heading south from Stornoway to bring assistance to the work of the Glasgow City Mission, which is facing increasing demands on its support for those in difficulties.

Donations include new socks for both men and women; lots of sleeping bags; new towels, and tea, coffee, sugar– as well as money, totalling £750 in cash that’s been raised.  It totalled about 30 boxes of aid.

The appeal is being organised by the Stornoway High Free Church for the second successive year.

Charlie Nicolson, who is part of the organising team, said that in the past the Islands had been hugely generous to people in need in other parts of the world – now there was a growing need in a city where many Islanders had lived or made their homes over the years.

He said that their hope was that other island groups would “buddy up” with groups in different cities across Scotland.

Glasgow City Mission has been at work since 1826 and is the oldest city mission in the world.  It serves people affected by homelessness, by poverty, by addiction, and prostitution as well as people involved in asylum seeking and other complex problems.

Around 200 people a day use the centre on average.  There’s an evening meal every day serving around 120 people.  There are about 25 daytime activities trying to raise the skills and confidence of people attending.  These include social interaction like lunch clubs, life-skills for cookery and budget management, art classes, music, gardening, and other activities.

As for the items being collected, the hot and cold drinks – plus all-important sugar - play a vital role in the everyday life of the mission. And the chance to take away clean clothes is a huge benefit to those in extreme poverty who had somewhere to stay but did not have resources beyond that.

The Mission also operates a winter overnight shelter and a family centre in Govan, with a range of facilities for parents and youngsters.

The mission has many connections with the Islands – including supporters who provide funding, as well as volunteers with an Island background while there are also centre users from Island backgrounds.

The mission has greatly increased its range of activities as a result of the support of funders from all Christian denominations and people of no faith - who are all convinced about the quality of the work done.