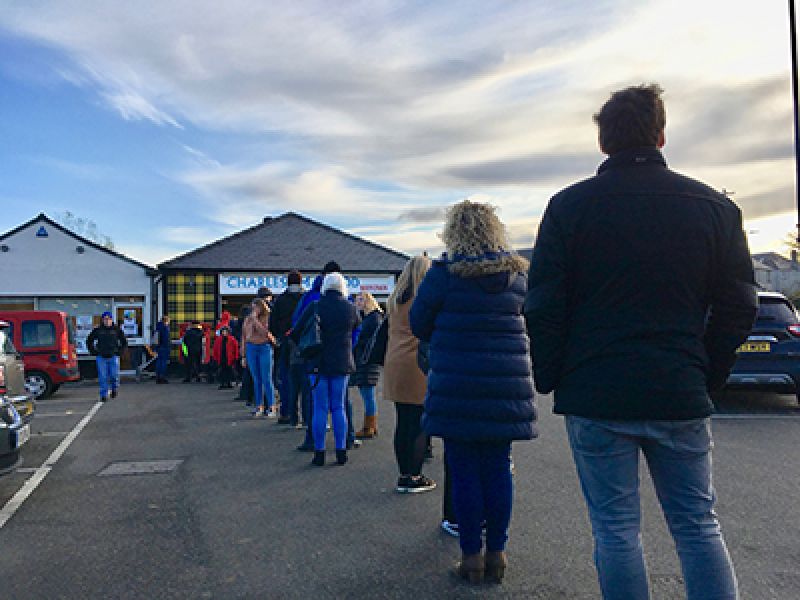 The old Trading Post shop next to Charlie Barleys was the temporary HQ for Western Isles Lottery, selling tickets for two P&D gigs to take place on the night of the Christmas lights switch-on in Stornoway Town Centre, this year on Tuesday November 26th.

Queuing in the cold paid off for many, as tickets for the under-18s gig, being held at the Nicolson Institute between 5.30pm and 6.30pm that night, sold out in a couple of hours.

It was a big day for organisers of the Western Isles Lottery, which has made a huge impact across the Western Isles since launching in August 2017. Bagging the biggest musical sensation in the islands was a huge boost for them – and one they believe will create a sensational night out for islanders.

Lottery spokesperson Janet Paterson told welovestornoway.com: “Peat & Diesel are phenomenal on the island, but more importantly they’ve put the island on the map and who knows what they’re going to do next. They very kindly offered to do these gigs for the lottery way back in the summer and we were quick to take them up on it.

“We’ve had dozens of messages from people wanting tickets who plan to come from the mainland on the night. This is why we’re selling the tickets face-to-face, so that locals have the best chance of getting the tickets.”

The second concert of the evening is for over-18s only and starts at Stornoway Town Hall at 10.30pm, well after all the other sparkle and excitement has ended for the evening, but lottery organisers planned that with a view to supporting the community.

Janet said: “We knew there were quite a number of other events at the weekends through November into December and we didn’t want to clash with them. We chose a Tuesday, especially as there is a big concert at the sports centre at the weekend.”

Switching the lights on in November has caused some comment, breaking with Stornoway’s long-held tradition of not getting excited too early about Christmas. But it will be a boost for local shops and businesses to have a lit-up atmosphere earlier this year, according to Janet.

“The shops were wanting the lights switched on earlier, in line with the mainland, because we’ve had comments that people come back from big Christmas lights and trees in Inverness and Glasgow, and Stornoway is still in darkness.

“It also seemed a waste of all the money that we spend on the lights every year, to only have them up a couple of weeks. It’s supporters of the Lottery that are funding all this – if they weren’t buying tickets we wouldn’t have the money to be doing this.”

Western Isles Lottery has raised over £155,000 in total to date, with £110,000 handed out for projects in communities from the Butt to Barra and £45,000 given back to individual ticket-buyers in prizes. A new bolt-on prize has just launched of a holiday for two in Malta, or £1,000 cash. Every ticket sold until 28th December will go in the draw to win that.

That made the weekend’s sale of tickets for Peat & Diesel’s shows into something of a celebration of the lottery’s success. Janet said: “Without a shadow of doubt it’s been successful, the committee (Tony Robson, Janet Paterson, Malcolm Paterson, Shona Macleod and Emma Henderson) have worked hard and as a result it’s gone from strength to strength, we’ve never had a dip.

“But even the smaller prizes we’ve given, if someone wins £40 it’s a win, they’re delighted.”

Pictures show the queue waiting in the cold for their tickets on Saturday, and committee members Shona Macleod, Janet Paterson and Emma Henderson ready for the rush, with the all-important gig wristbands.