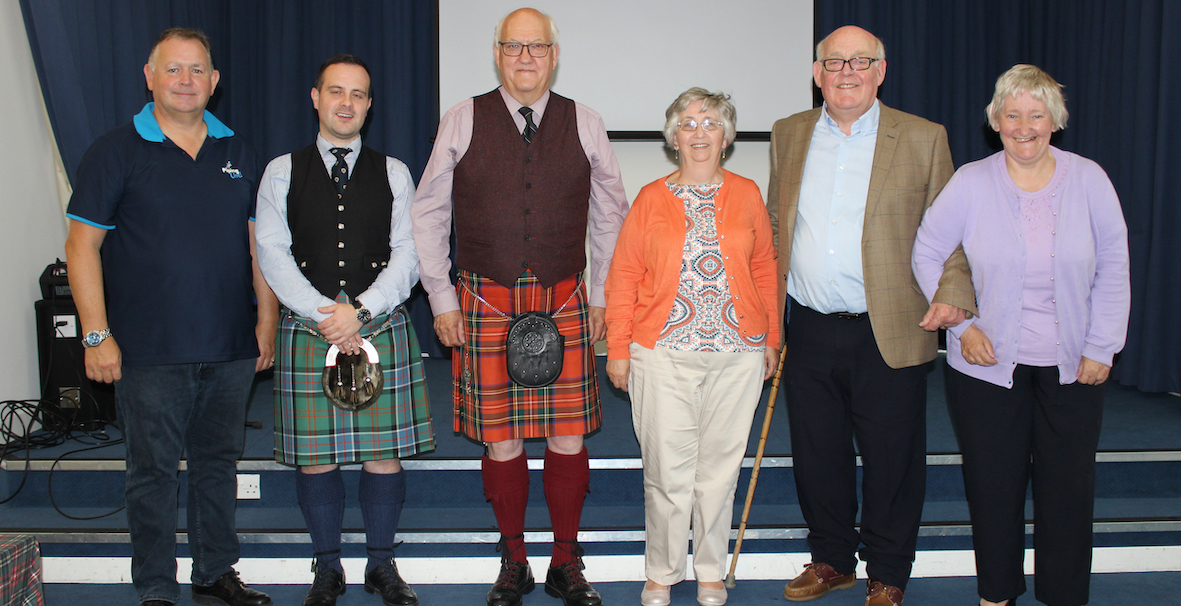 Donald Macleod’s Collection of Piobaireachd, launched as part of the Piping Live festival, is the first time all Donald Macleod’s piobaireachd have been brought together inside one cover and the project received funding from community wind farm Point and Sandwick Trust and the Lewis and Harris Piping Society.

Point and Sandwick Trust, which supports the annual P/M Donald Macleod Memorial Piping Competition to the tune of £5,000 a year, gave the Lewis and Harris Piping Society £300 towards its contribution to the printing costs of the book. The Piping Society contributed £500 all in.

It is the wind farm’s third contribution to cultural events relating to piping this year.

As well as the grant enabling the Piping Society to continue holding the PM Donald Macleod MBE Memorial Competition in its home town of Stornoway, the wind farm also gives an annual £1,000 to Lewis Pipe Band to help with the costs of attending competitions on the mainland – including the World Pipe Band Championships which takes place in Glasgow Green this weekend.

Donald John MacSween, General Manager of Point and Sandwick Trust, said: “We are always happy to support our friends at the Lewis and Harris Piping Society, who do a great job of preserving our piping heritage here in the Western Island and the legacy of Donald Macleod.

“We were pleased to make a contribution to this new book and welcome its launch at Piping Live, the festival which culminates this weekend with the Worlds, which the Lewis Pipe Band will be attending and we wish them all the best for that.

“Supporting culture is a key aim of Point and Sandwick Trust – our founding principle is to promote the social, educational, cultural and environmental wellbeing of the people of the Western Isles – and piping has a unique cultural importance. We are keen to promote and preserve it.”

Pipe Major Donald Macleod, born in Stornoway in 1916, was an outstanding player and won all the major competitions in his day, some several times over. He was also a tutor and a Seaforth Highlander but is best remembered for his prolific compositions, including 27 piobaireachds.

However, his entire piobaireachd collection had not been published together until now and the project was led by Donald Macleod’s family as a tribute to their much-loved father.

They received support with technical layout from Roddy Macleod MBE of the National Piping Centre and help with the text from John Wilson, a former pupil of Donald Macleod.

At the launch event, John Wilson spoke about the technical aspects of Donald Macleod’s compositions and emphasised the influence of Gaelic song on his melody lines, which gave them a distinctive ‘blàs’ or flavour. He illustrated his point with a demonstration of canntaireacdh singing, which communicates the music to be played.

Also, Dr John Smith, Chairman of the Lewis and Harris Piping Society, presented the cheque for £500 to Susan Macleod, Donald Macleod’s daughter, towards the costs of producing the book.

Dr John Smith said later: “The Lewis and Harris Piping Society are very pleased to support this project to bring together all of Donald Macleod’s piobaireachd compositions under the one cover.

“Donald Macleod produced six books of light music and one book containing 20 of his own piobaireachd compositions. However, he composed another seven piobaireachd, after that first book was published, which were published in various other formats.

“This project brings together all his piobaireachd compositions in one book.

“It was led by his daughter Susan, who sees this new book as a tribute to a devoted father.

“She was assisted by Roddy Macleod, Director of the National Piping Centre, and John Wilson, a well-known piping judge and raconteur.

He added: “Donald Macleod’s piobaireachd compositions reflected his cultural heritage and musical background and many of them are dedicated to family, friends and colleagues. He was also inspired by nature with turns such as Lament for the Rowan Tree and Field of Gold. But perhaps is most poignant composition was Lament for the Iolaire.

“Many of the tunes in the piobaireachd repertoire are hundreds of years old but this new book, bringing together all of Donald Macleod’s piobaireachd compositions will be a must-have text for any serious student of more modern compositions.

“The Lewis and Harris Piping Society have provided a platform for Donald Macleod’s music for the past 25 years in the form of the memorial competition held in his name, in his native town of Stornoway, at the beginning of April each year and we are delighted to make a contribution towards the cost of this new production, enabled by a generous donation from our main sponsors, Point and Sandwick Trust.”

Donald Macleod’s Collection of Piobaireachd costs £15 and is available from the National Piping Centre.