Two sets of marina facilities in Harris were officially opened on Wednesday 24 July.

The facilities, owned and operated by Harris Development Ltd (HDL), provide the last vital link in the chain of marine facilities.

Shetland yachtsman, Andrew Halcrow, was guest speaker and he cut the ribbons at the two Isle of Harris Marina facilities in Tarbert and Scalpay.

Andrew has sailed more than 100,000 miles as skipper on sailing boats including a yacht he built in which he sailed around the world with his brother. He was also Master of the vessel ‘Swan’ which used to come to visit the islands to give sail training opportunities to local young people.

The project was supported by Highlands and Islands Enterprise (HIE) with a grant of £235,000 to develop the £1.397m project.

Since new pontoons were installed at Tarbert and Scalpay, the number of vessels visiting Harris doubled.

2019 has already seen the number of leisure and commercial vessels visited the new marina hub in Harris has increased by over 120% on the figures for April and May last year.

Up to 90 vessels can be accommodated at the two locations including visiting leisure boats, existing marine businesses and private boat-owners.

Rachel Mackenzie, HIE’s area manager for the area team in the Outer Hebrides, said: “The growth of marine tourism in the Outer Hebrides has been quite dramatic. The waters around our islands are a premium sailing destination, not only in the UK, but in Europe. Tarbert and Scalpay have major attractions such as shops, restaurants, a distillery and a Harris Tweed shop. 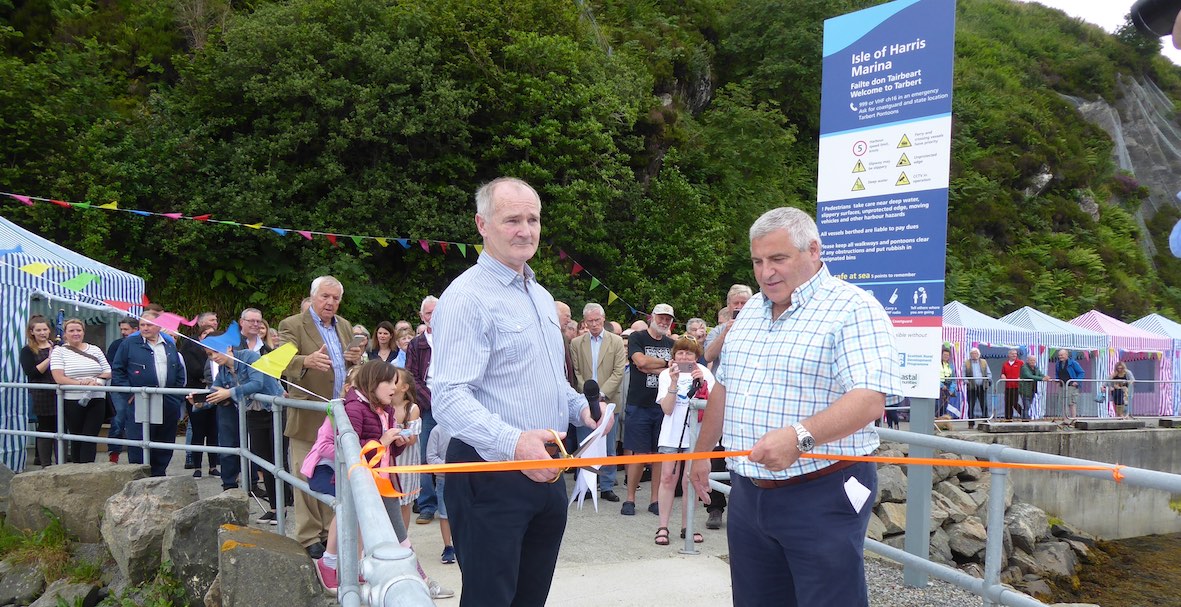 “These places are all experiencing increased trade with many vessels choosing to stay for several nights. This is a fantastic project and these developments fit well with the national strategy for marine tourism and strengthens the availability of sailing waters in the Outer Hebrides.”

Kenny Macleod, chair of HDL, said: "This is a proud day for us as we officially open our new marina facilities. This is the culmination of many years of hard work by a dedicated group of volunteers. In the last year the pontoons have been well used by local boats and visiting leisure crafts. At the same time, we were receiving more applications for berths for local boats. The support of HIE and Comhairle nan Eilean Siar was crucial to getting us to this point. They have been very supportive and assisted us through the funding and development process.

“We are also delighted with HIE’s support for our development officer and we are fortunate to get someone with such skills and experience as Fred Taylor to take on the role. We now have a second development officer, Grant Fulton, who is fully funded by HIE and is working across Harris on new projects which have emerged from the Harris Plan.

“We have a very rich maritime heritage and look forward to sharing it with all who come along to Fèis Mara na Hearadh – the Harris festival of the Sea held this week, that allows us to celebrate the amazing place we live in and the rich environment around us.”