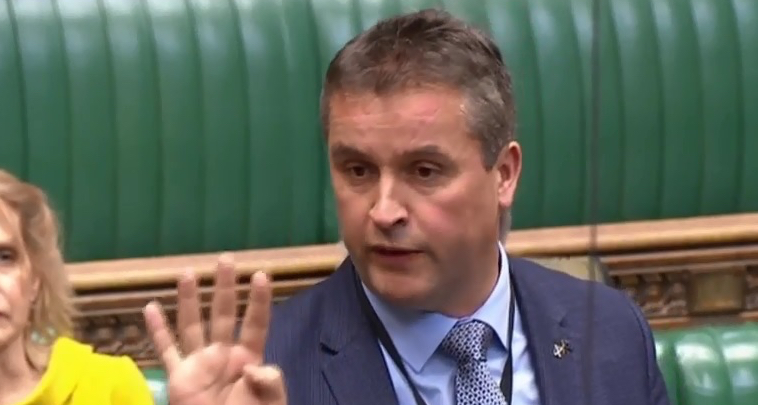 Mr MacNeil said: “A major help in reducing the UK’s Carbon footprint is the inclusion of a 600mw interconnector to the mainland – from the best wind resource in Europe.

“At the moment Ofgem are talking about a 450mw link, for just 4p more for the billpayer, we could do a lot more.

Mr Gove said it was a ‘fair point, well made’ although adding it was a decision for Ofgem.

Mr MacNeil says he was contacted by many constituents asking him to take part in Wednesday’s Opposition Day 'Climate Change' debate.

The Labour MP Chris Elmore earlier told MPs: "The climate change debate has moved on rapidly in recent months, and let us all agree on one thing: we are no longer here to debate whether this problem is happening.

"Look at what is happening to our planet: from the scorching hot week we had in February this year to the blistering hot summer last year, our climate is changing even in the UK before our very eyes, but while these ice-lolly weather patterns might be a gift to some of us in the western world with some capacity to adapt, the price we pay for them as a planet is catastrophic.

"We see what is happening to our climate in the UK and its effects, namely extreme weather, both hot and cold, of increasing frequency, but we must always remember that our country is predicted by climate scientists to be one of the least affected by global climate change.

"In 2019, when we think about and debate climate change action it is not enough simply to coo over David Attenborough and give ourselves a pat on the back for shining a light on what is happening to our world; as other Members have said, we must act and we must act now. This is the biggest issue humanity has ever faced, and it requires us to be bold and to do much more than just speak out. Indeed, Greta Thunberg put this better than I or any other Member could:

“To do your best is no longer good enough. We must all do the seemingly impossible.”

"But what can we do? Well, for a start, we must support today’s motion, which is about acting decisively to lead the way and being a catalyst for change both here in the UK and internationally. The magnitude of this issue demands cross-party consensus and it demands that we act swiftly. Taking this first step today must be the start of us taking the right path at this most precarious of crossroads.

I cannot speak out in this debate without putting on record how deeply disappointed I was when on her first day in office one of the Prime Minister’s first acts was to abolish the Department of Energy and Climate Change. What message did this send to the rest of the world? It sent the message that the UK was no longer a leader on climate change, but was instead resigned to being a follower. Let us not forget that under the last Labour Government we became the first country in the world to legislate legally binding carbon budgets, in the Climate Change Act 2008.

I will conclude now, given the time limit. I want to leave hon. Members, and particularly the Government, with this point. What if the French fire service had known about last month’s fire at Notre Dame 10 years before it happened?

"What if we had known about any of the terrorist atrocities across the world 10 years before they happened? Just think what preventive action we would have taken if we had had that level of foresight and known about those catastrophes, and countless others, a decade ahead of them happening. With climate change we have that foresight and, crucially, the means to do something about it.

"So when we leave this place today and go back to talking about other important matters such as no-deal cliff edges, let us all commit to remember one thing: if we think the no-deal cliff edge is scary, it is barely in the foothills of what the climate cliff edge could look like."