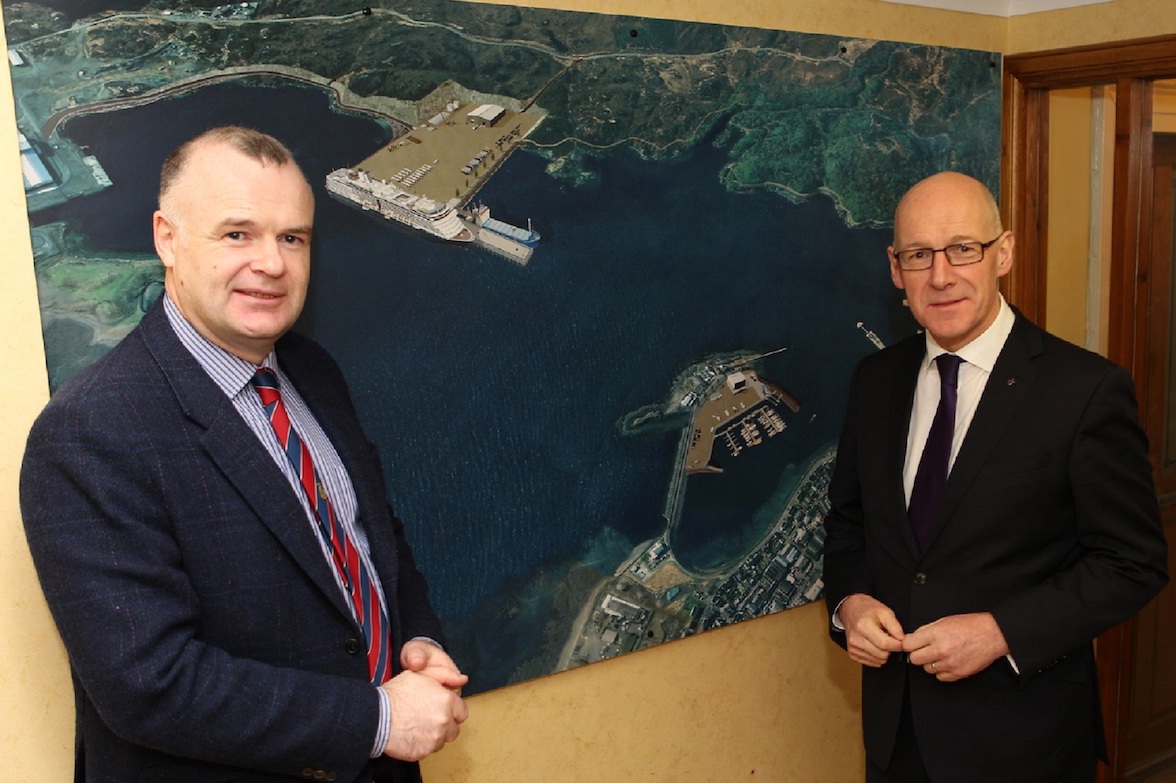 The revamp of Stornoway Harbour takes another step forward as the Board of Highlands and Islands Enterprise (HIE) approves £3.5m funding for the creation of a new marina and facilities at Newton Basin.

Deputy First Minister, John Swinney met with key representatives of the Stornoway Port Authority (SPA) and HIE today (Thursday 14 February) during his visit to the town.

Mr Swinney heard about the port authority’s £66m masterplan which identifies projects which will boost economic growth in marine tourism and other sectors.

Plans for the first phase of the 20-year masterplan includes the creation of a new marina at Newton. HIE’s investment will support SPA to create 70 new berths, a marine engineering workshop and infrastructure to support a new food standards building with an estimated cost of £11m, all at the town’s Newton area.

The Outer Hebrides is a key sailing destination for visitors, and Stornoway is an important link in the chain of marinas stretching from the Butt of Lewis to the Isle of Barra.

Work will start as soon as consents have been obtained, expected in April this year, on the Newton Basin project and once completed, will offer shoreside facilities for those using the new marina as well as a public slipway and a long awaited boat lift facility and boat storage.

The new berths at Newton will  complement the 80 berths at the popular marina in Bayhead which was completed in 2014. The expanded marina quickly filled up soon after they were installed meaning there is still a shortage of space in summer.

Other projects included in phase one and two of SPA’s masterplan include the creation of a new deep-water port for cruise ships, cargo and de-commissioning.

During his visit to Stornoway, Mr Swinney saw first-hand some of the completed projects and development activity being carried out as part of SPA’s 20-year vision.

He said: “Our seas continue to be a central feature of Scotland’s economy and our plans for jobs and growth.  The Scottish Government is fully supportive of the ports industry, and we recognise the hugely beneficial impact Stornoway Port Authority (SPA) has on both the local, regional and national economy.

“Remote communities in particular greatly benefit from marine tourism, resulting in additional business, jobs and prosperity. The creation of a new marina at Newton will have a positive effect on the wider economy for years to come.

“Today was an excellent opportunity to see some of the projects already completed as part of SPA’s 20-year vision and I look forward to seeing the rest of their future developments.”

“I am delighted that the Deputy First Minister has been able to hear about ‘The Stornoway Vision’ today as well as seeing some of the projects already completed. We are pleased to support the SPA’s Newton Basin project which aims to safeguard the crucial role of the port in supporting the economic growth of Stornoway and the islands and we look forward to working with them in the future.”

Alex Macleod, Chief Executive of Stornoway Port Authority, said: “The development of the new marina is a major part of our Master Plan and will bring significant economic benefits to Stornoway and the wider islands, as well as to visitors.

“At present there is a shortage of yacht berths and amenities which is constraining potential growth in marine tourism.

“The improved facilities will be better, safer and more attractive for boat owners and this funding from HIE will help progress a major milestone project.”

Scottish Conservative MSP for the Highlands and Islands Donald Cameron said:“This injection of funding from HIE is extremely welcome, and having met with the Stornoway Port Authority, I know that this will help in achieving the end goal of establishing a world-class, deep-water port.

"I recently raised this issue with the Scottish Government in the Scottish Parliament, and it is clear there is widespread support from across the political spectrum to redevelop Stornoway’s harbour, and also to look at how best we can develop other ports across Scotland.

"This project will not only be a major boost to the Western Isles economy when it is completed, but it will be significant for Scotland too, and I will continue to work with the Stornoway Port Authority to help it come to fruition.”

Photograph: Alex Macleod, Chief Executive of Stornoway Port Authority with John Swinney.  Below, a visualisation of the plan 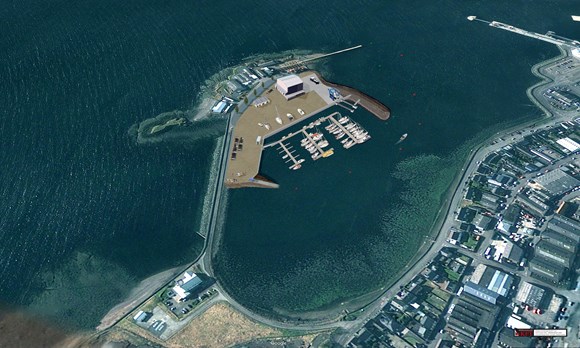