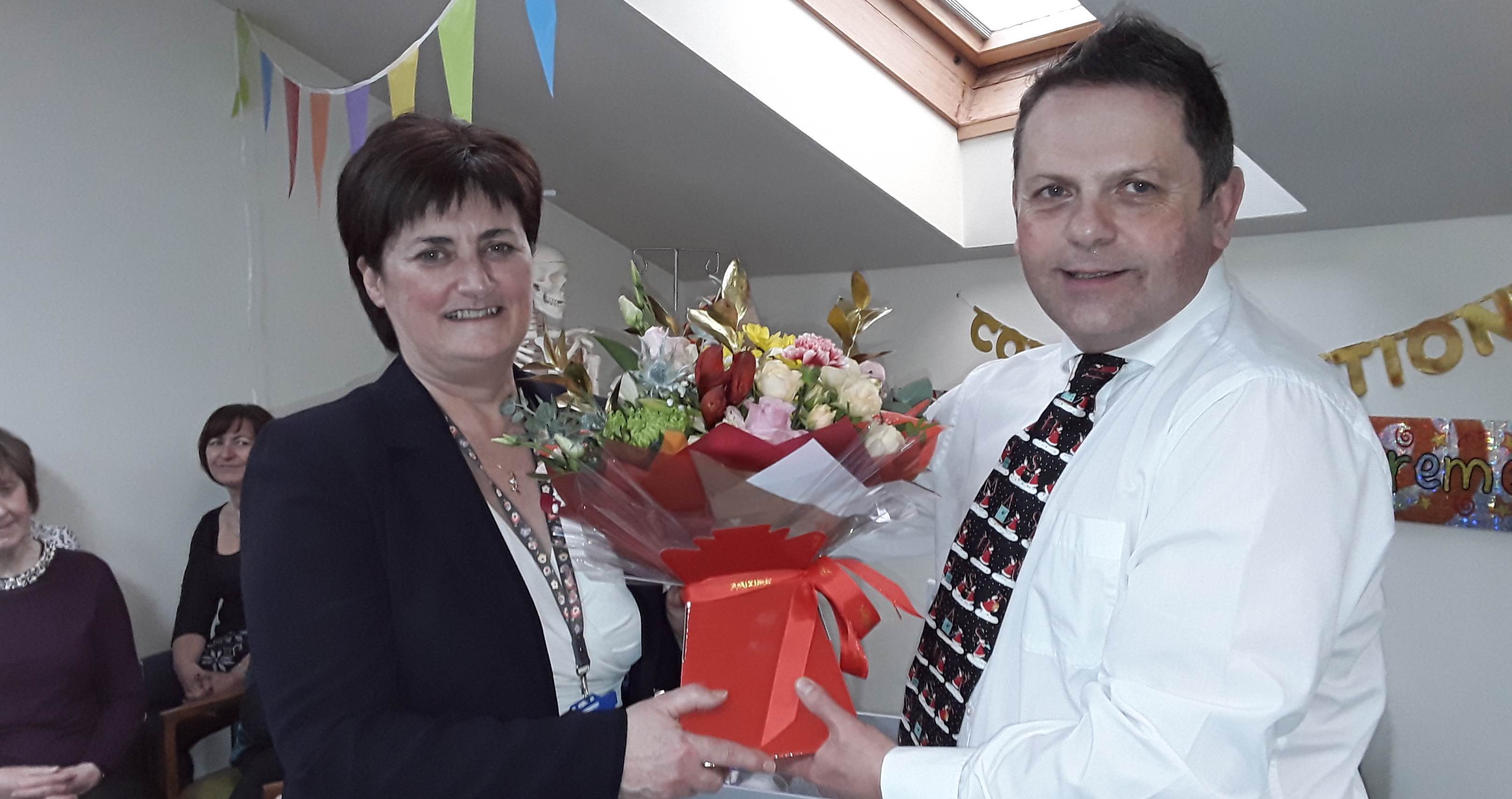 “I am proud of our health services,” Chris Anne said. “It has some challenges, but I’m very proud to have been involved in so many things which have brought the service forward.”

From Port of Ness, Chris Anne’s career began training as a student nurse at Edinburgh Royal Infirmary in 1976.

Following completion of training, she then worked in various theatre wards at Edinburgh Royal Infirmary before returning to her home islands with husband Torquil at the beginning of 1982, working in theatre in the former Lewis Hospital.

Chris Anne took a five-year break from nursing as she raised her family – son Ewan and daughter Laura – returning to work with NHS Western Isles part-time as a bank nurse in 1989.

She moved on to work in the surgical ward of the former Lewis Hospital, then as a theatre nurse when the new Western Isles Hospital opened in 1992; and, as she returned to full-time work, was promoted to Theatre Sister.

And 2007 saw Chris Anne move to the post of Senior Nurse at Western Isles Hospital, but soon afterwards she agreed to cover the post of Interim Hospital Manager; a secondment which lasted three years.

The next NHSWI post for Chris Anne was Associate Chief Operating Officer, before she took up another interim post as Nurse Director, then being formally appointed to the position in 2016.

Chris Anne said: “I’ve enjoyed every job I had. I loved theatre and operational management. There have been very few days when I’ve thought ‘I don’t want to go to work today’.

“The way nurse training is provided has totally changed and in many ways has changed how nurses work, though the actual caring side of nursing remains the same, but that has always been a strong essence of health care within NHS Western Isles.”

She continued: “Another large change has been the introduction of the Integrated Joint Board (IJB) in terms of how we all work together, bringing about a new era.

“The health service never stands still. It’s constantly changing and it becomes more of a challenge to keep up with the pace of change.”

Chris Anne wishes to extend her thanks for all the support that she has received over the years from the Chief Executive, fellow Directors, Board members, nurses and midwives, AHPs, medical staff, and all those working in Non-Clinical Services who provide the essential services to support clinical staff maintain patient care and safety.

NHS Western Isles Chief Executive, Gordon Jamieson, said: “Chris Anne is a role model for people to follow. I have worked with her for over a decade and she always puts the interests of patients whom we serve first.

“She has worked tirelessly throughout always going more than the extra mile, with the highest standards of professionalism and integrity.

“I would like to thank Chris Anne both personally and on behalf of the Western Isles NHS Board for over 40 years service to the NHS in Scotland, and wish her the very best for her very deserved retirement.”

William Findlay has taken over as Nurse/AHP Director and Chief Operating Officer at NHS Western Isles.

Commenting on his post, he said: “I’m very much looking forward to working with all of the teams, recognising that Chris Anne leaves me very big shoes to fill.”